Though a common feature in the stock market, Exchange-traded Funds (ETFs) are still young in the crypto sector. Today the market is teeming with crypto-centric ETFs, most capitalizing on Bitcoin’s (BTC) appeal. A new study shows that 14 ETF firms hold BTC worth more than $28 billion.

According to data provided by trafingplatforms.com, the fourteen hold 809, 848 BTC. That figure works out to roughly $28.5 billion. Again, their stash amounts to 3.9 percent of the total BTC supply of 21 million coins.

Tradingplatforms.com’s Edith Reads has been analyzing the data. In her opinion, ” Bitcoin’s volatility is a turn off for potential investors. Here’s where ETFS come into play. Investment firms are offering them as a safe means for BTC onboarding. They allow investors the exposure to the asset with measured risk.”

A deep dive into the data reveals a couple of interesting facts. First, the Grayscale Bitcoin Trust has the lion’s share of BTC reserves. The ETF has invested in over 640 thousand BTC (about $22.8 billion). It owns over 80% of the combined BTC held by the 14 ETFs.

Secondly, Canadian firms dominated the listing. Out of the fourteen products the study considered, they contributed six. The U.S based ETFs were second with four products, while German and Swiss firms had two products each. 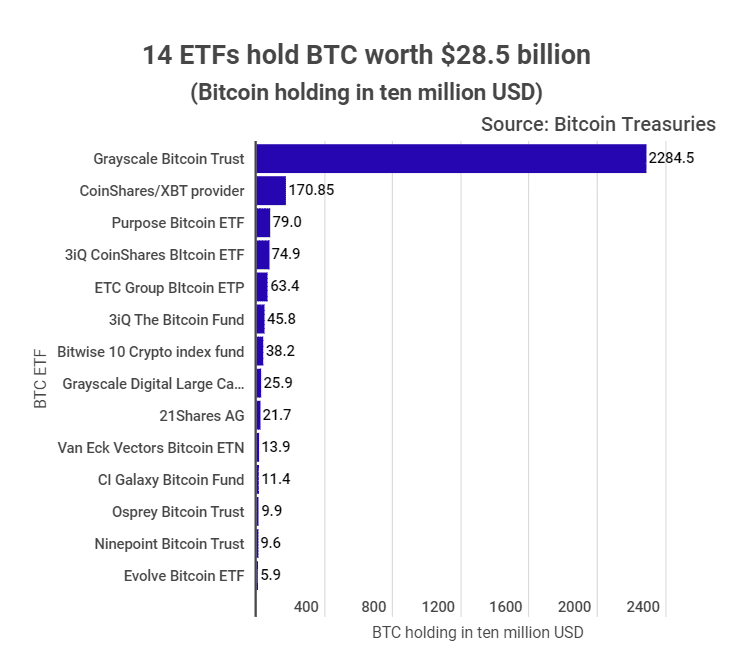 Coming in at the second spot was CoinShares/XBT Provider ETF. The Swiss company owns about 48,000 BTC worth around $1.7 billion. And following in third place was Purpose Bitcoin ETF with a reserve of nearly 22,000 BTC ($790 million)

3iQ CoinShares BTC ETF took fourth place with approximately 21,000 BTC with a value of $748.6 million. Rounding up the top five was the ETC Group BItcoin ETP. The German entity owns close to 18,000 BTC worth over $633 million.

Why the Canadian dominance?

The Canadian dominance is due to the nation’s relaxed stance on BTC ETFs. For instance, it has licensed both BTC spot trading and futures ETFs. Many Bitcoin enthusiasts tend to favor the former over the latter product.

In contrast, the U.S has been reluctant to license BTC spot-based ETFs. Its Securities and Exchange Commission (SEC) prefers the less popular BTC futures-based ones. That stance has put off would-be investors in the space and forced some to list their products in neighboring Canada.

The SEC has recently made news by rejecting applications for listing a couple of BTC spot-based ETFs. Those rejections affected a joint application by Skybridge Capital and First Trust. The former is a leading hedge fund, while the latter is an investments advisory company.

That decision follows an earlier one to deny Kryptoin the listing of a similar product. In the past, the regulator turned down VanEck and Wisdom Tree applications for spot BTC ETF. That’s despite it giving three BTC futures tracking ETFs applications the green light to operate.