Home » blog » Energy consumption by one Ethereum transaction could power over 100,000 VISA transactions

According to the data, the estimated global annual Ethereum energy consumption as of 11th January 2022 is 106.33 TWh. For some perspective, this is the equivalent of Kazakhstan’s energy consumption. Similarly, a single transaction uses as much power as an average US household would in 8.16 days.

When asked what they thought of the data findings, Edith Reads from Tradingplatforms.com had this to say, “The high energy consumption by the Ethereum network currently is largely due to the PoW validation method. The foundation has already announced underway plans to transition to PoS, which I believe will reduce the consumption significantly. I think that will be quite crucial, especially as the tech world readies itself for the Web 3.0 era.” 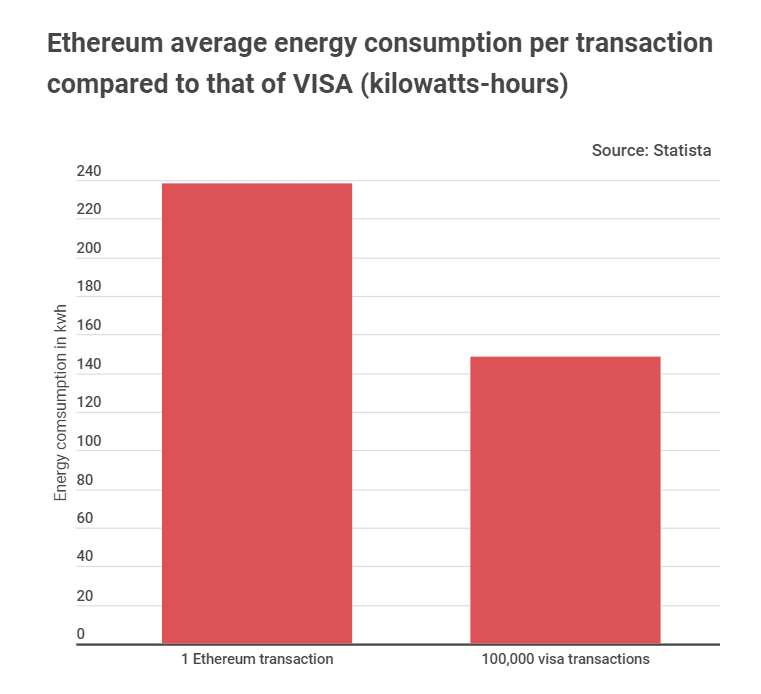 The network’s global energy consumption increased drastically in 2021, perhaps because of the increased crypto transactions. The carbon footprint of a single Ethereum transaction is equal to that of over 250,000 VISA transactions.

Transition to PoS set to reduce consumption by 99%

The move from Proof-of-Work validation will get rid of miners on the network. PoW consensus requires miners to validate transactions on the block, a process that requires them to solve complex cryptographic puzzles. The miners often bring in more computational power, which increases the network’s energy consumption.

The Ethereum Foundation has revealed that the move to Proof-of-Stake consensus will reduce the network’s carbon footprint by up to 99.95%. A PoS consensus model uses validators in place of miners. Validators stake their assets as collateral to validate network transactions. This model gets rid of the high computational energy required in PoW consensus.

While speaking at a StartmeupHK virtual conference last year. Ethereum’s co-founder, Vitalik Buterin, pointed out that the transition could solve the network’s environmental issues. He added that the model’s complexity was a major challenge, and they ended up spending six years on the project, although they initially thought they would only need one.

Energy consumption among concerns over Web 3.0

Enthusiasts are excited about the coming of Web3, which is deemed to be a new age of the internet. Web 3.0 will mostly be based on the Ethereum network, and critics have raised concerns over how much energy the new technology will consume.

The transition to PoS consensus has been in the works for several years now. The development team had earlier announced plans to move in early December but eventually pushed it to June 2022.